Last month I collaborated with Warrborn, a Vancouver metal band, on the artwork for their first full length album.  It has been a few years since I have undertaken full album art for a band, so it was cool to get to do something a little bloodier and gorier.  I really like the way the inside of the album art matches up with the wrap-around cover, and gives an up-close look at a tiny detail.  I have also included the initial couple sketches I sent the band, trying to understand what they were looking for when they described the concept of the cover.  You can listen to the album at Spotify or Apple Music and also follow the band through Facebook. 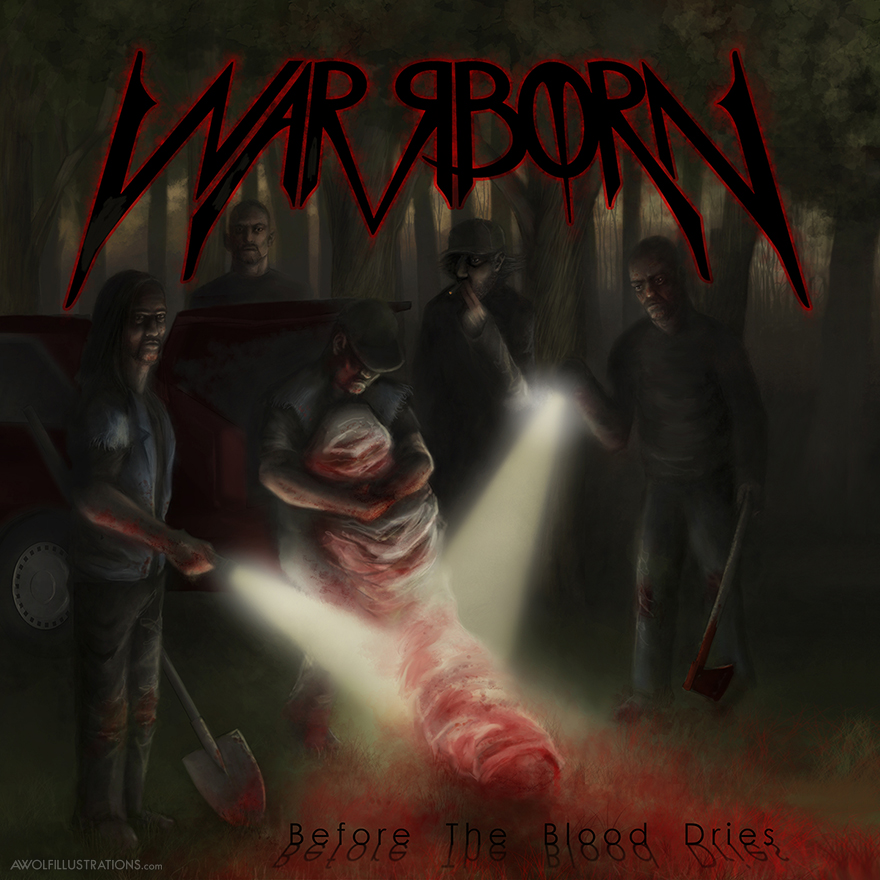 Over the years I have worked for a lot of different metal, punk, and thrash bands, mostly out of the Vancouver scene but also a few international acts. This is a collection and summary of about ten years worth of work. Not all, but the stuff that I am still proud to share and show. Seeing all this work together makes me pretty happy and even though I have learned a lot and changed my style and approach, I think as a collection it still stands the test of time and looks pretty great with all these old projects together in one spot.

First off is a shirt design for Revenger, in which the band requested that I redraw a black and white version of the original album artwork by Paolo Girardi. For this I drew the image on Ampersand Clay Board, which was the first time I have used this media. It is interesting because you can draw on the surface with black ink like paper but then you can go back over and scratch away detail adding fine white lines through subtraction. You can see the original album artwork and purchase a shirt through Revenger’s Bandcamp. 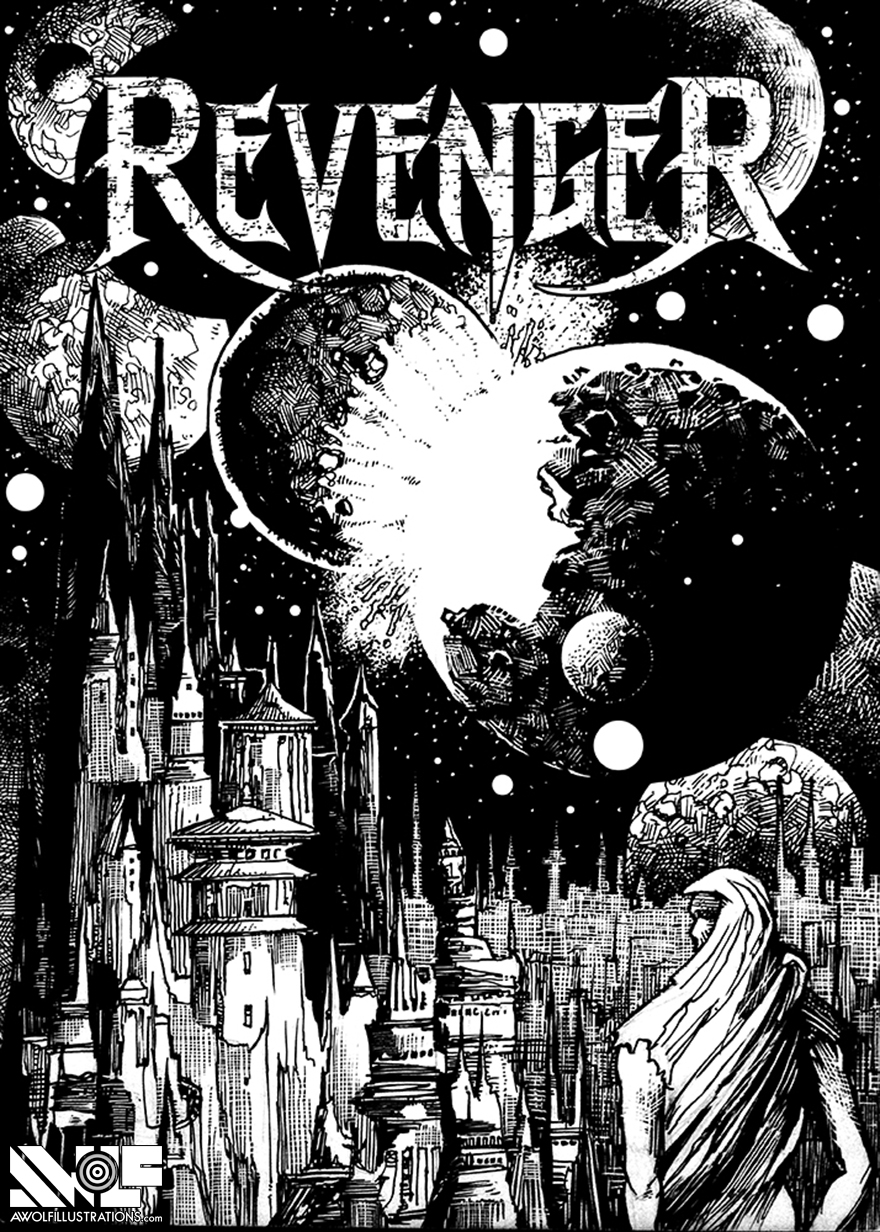 A few years ago now, about 2015 if I remember correctly, Karl Agell the ex-frontman of Corrosion of Conformity contacted me about doing the artwork for his new band King Hitter. It was a 5 song EP and I don’t think much else has come from King Hitter in the way of new music, but they continue to tour. It was cool seeing my artwork used by someone that I had known of musically since I was about 15, ever since one of my work mates gave me CDs by Corrosion of Cornformity, Clutch and Tool’s Undertow. 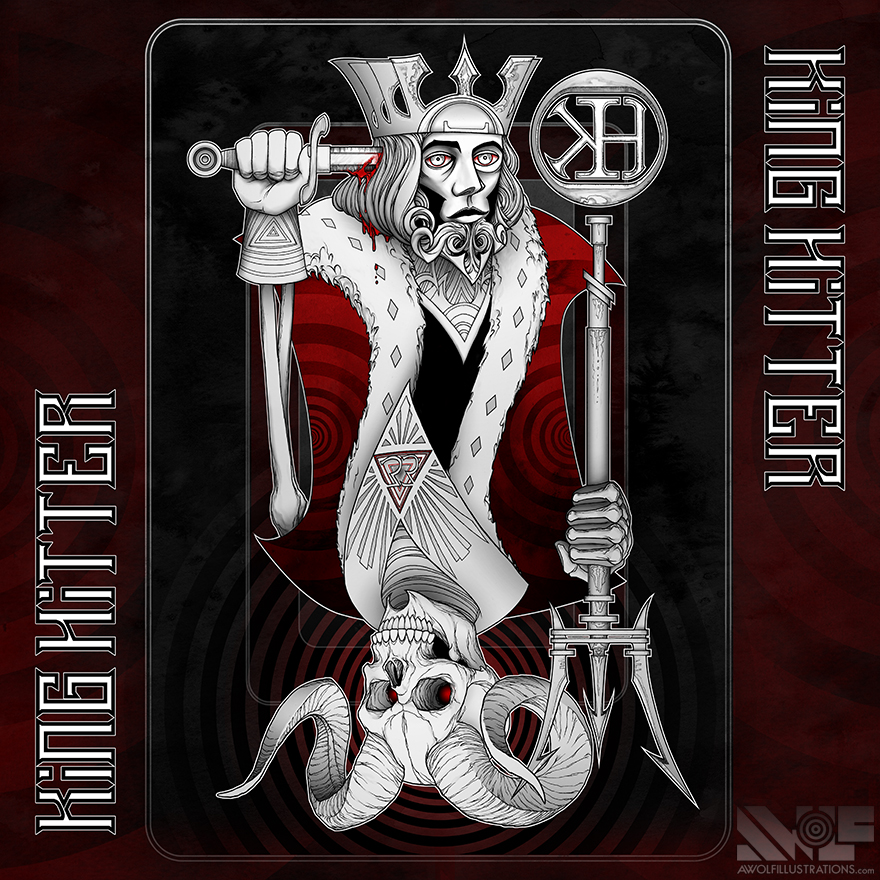 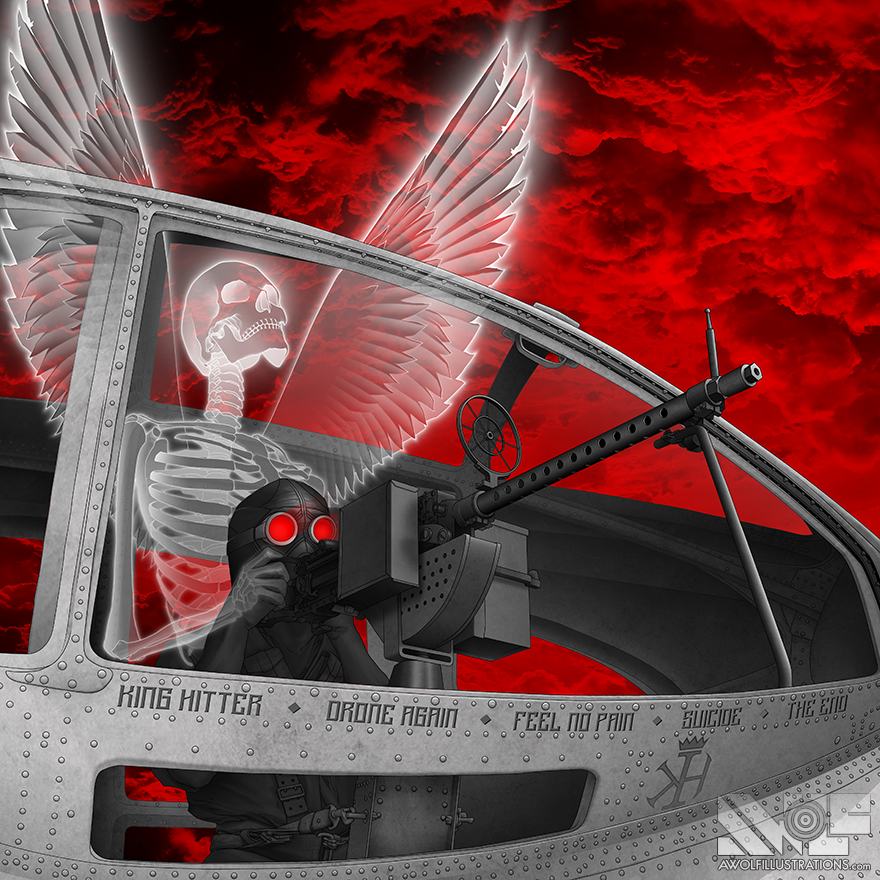 Soon after Karl contacted me when he rejoined with members of Corrosion of Conformity to design a shirt for a string of shows celebrating the 25th anniversary of their album BLIND. I really love this shirt. It is still my favourite band shirt I have designed. I still wear it. 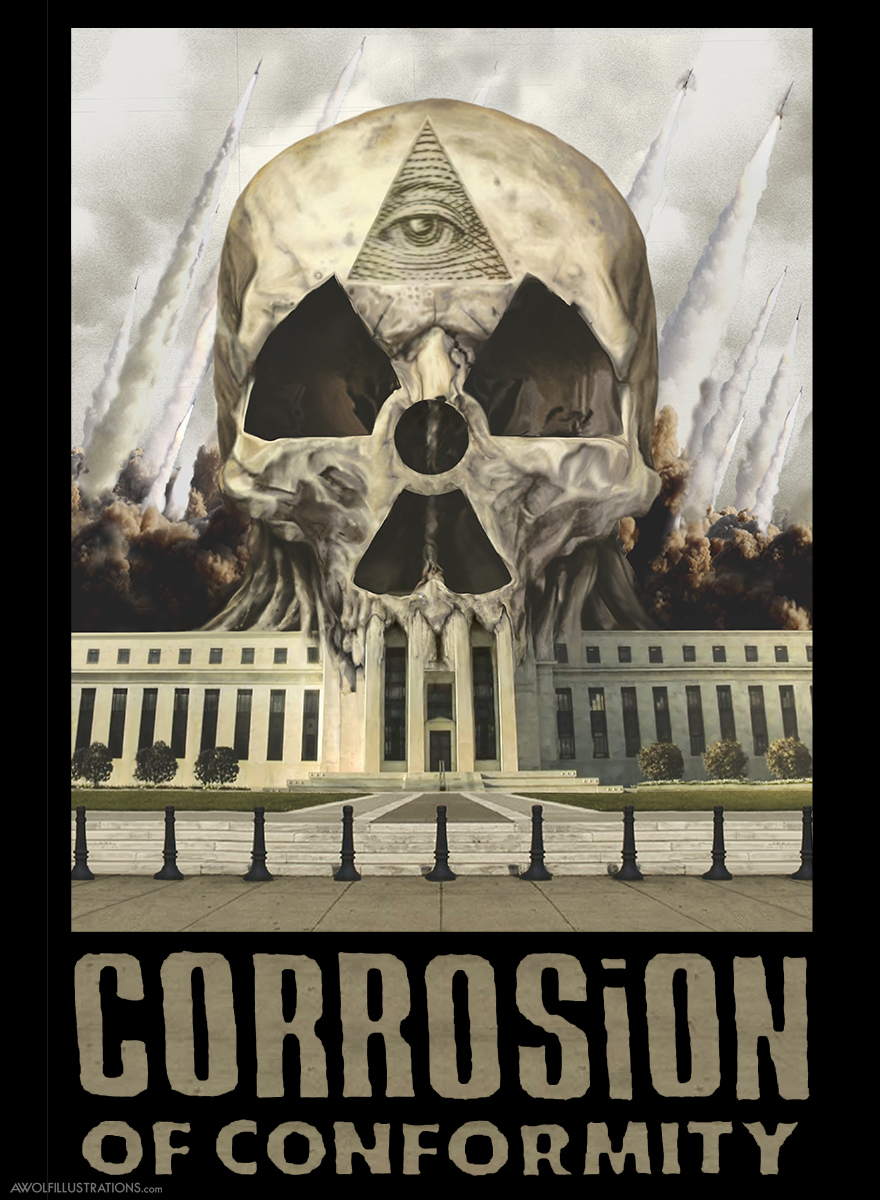 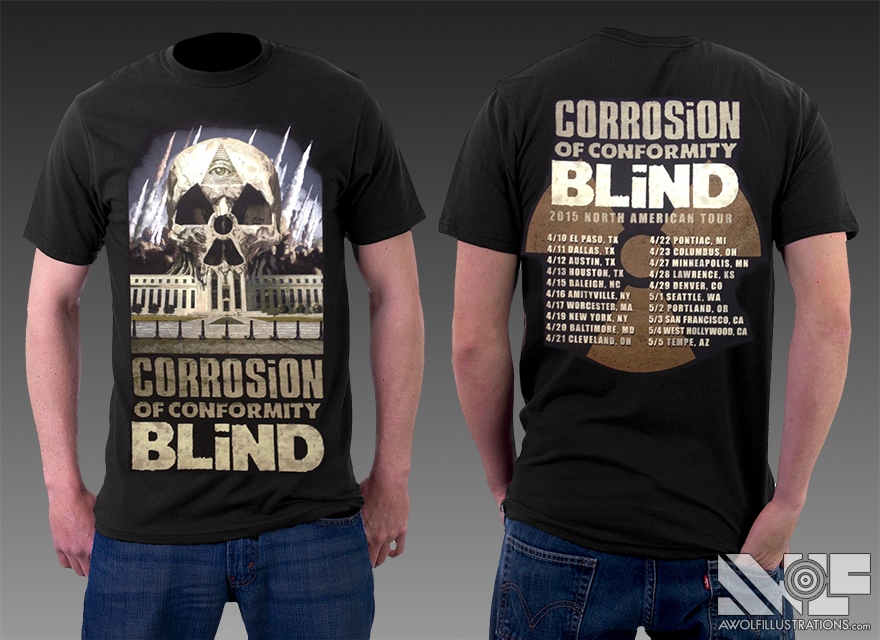 One of my favourite bands I have worked for is none other then Maple Ridge’s Brauheist (my home town). I loved watching this band and went and saw them countless times at the Wolf and other bars around Vancouver. Their one and only album is savage filth, full of guitar feedback and roaring vocals. This is one heavy album and I have burnt it out over the years. The album artwork is just as filthy and offensive. An idea that I think was conceaved by their guitarist Jef, I had the pleasure to bring this gruesome comic book art to life. You can listen or download the album for free below. 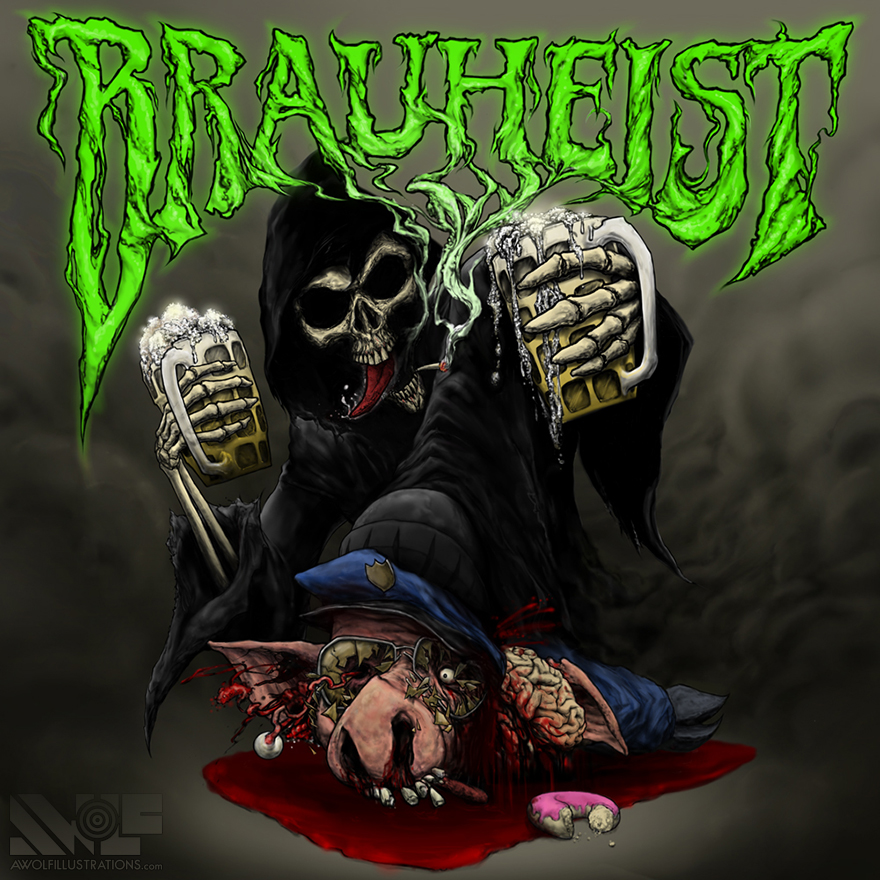 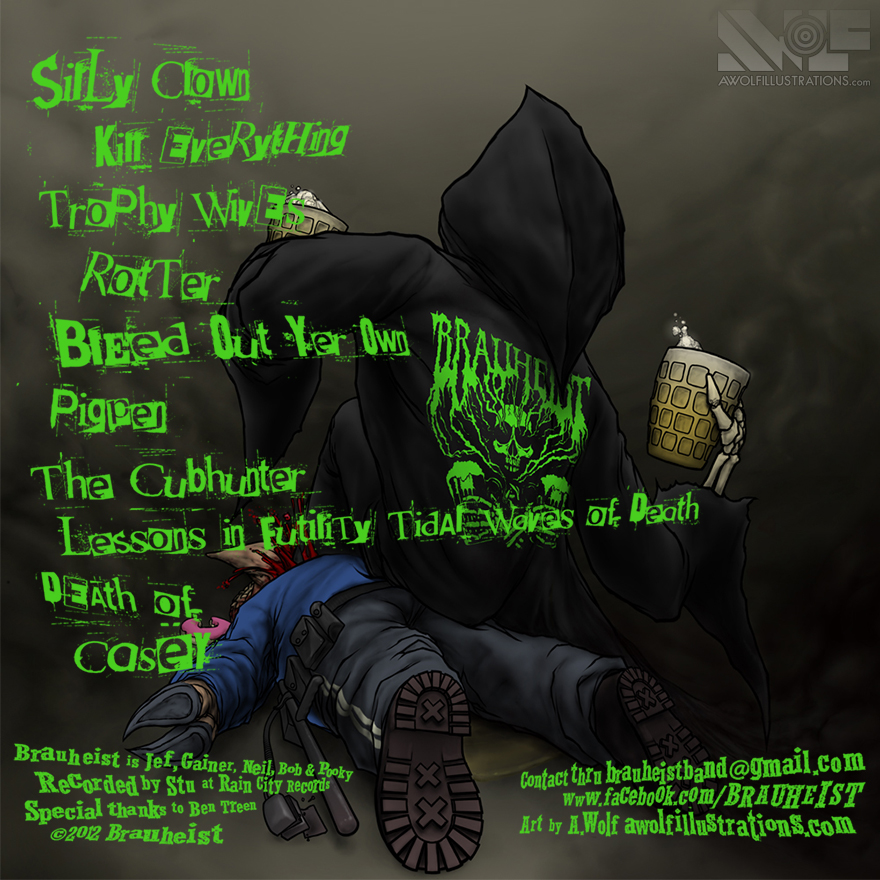 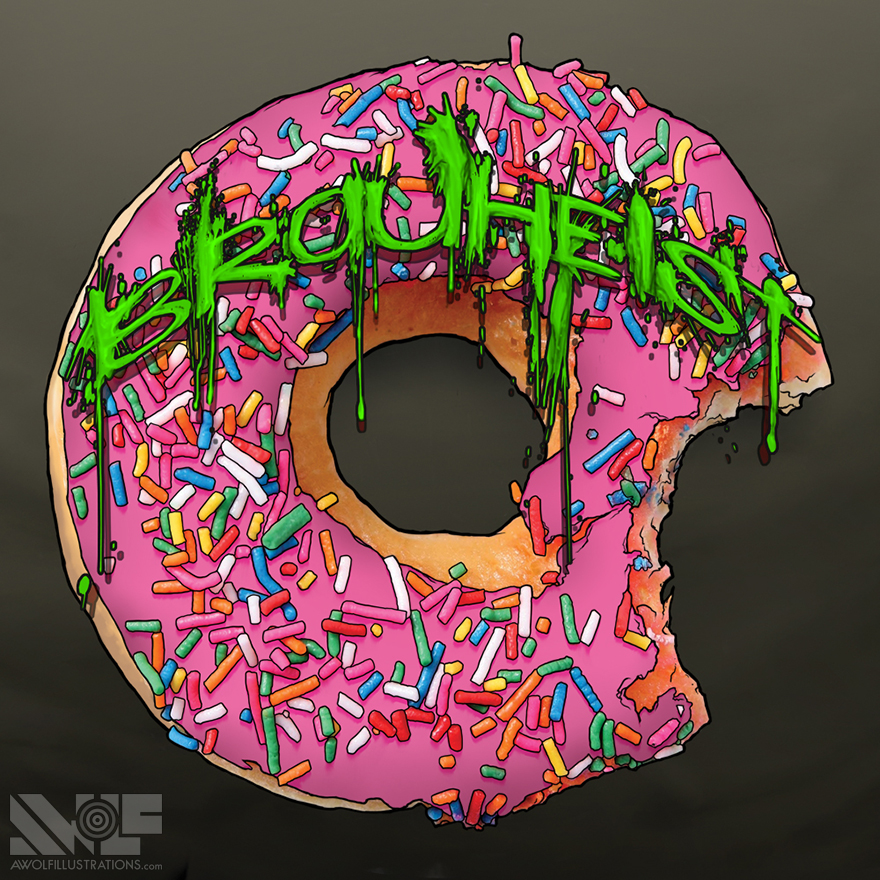 This is an unused logo I did for Brauheist. 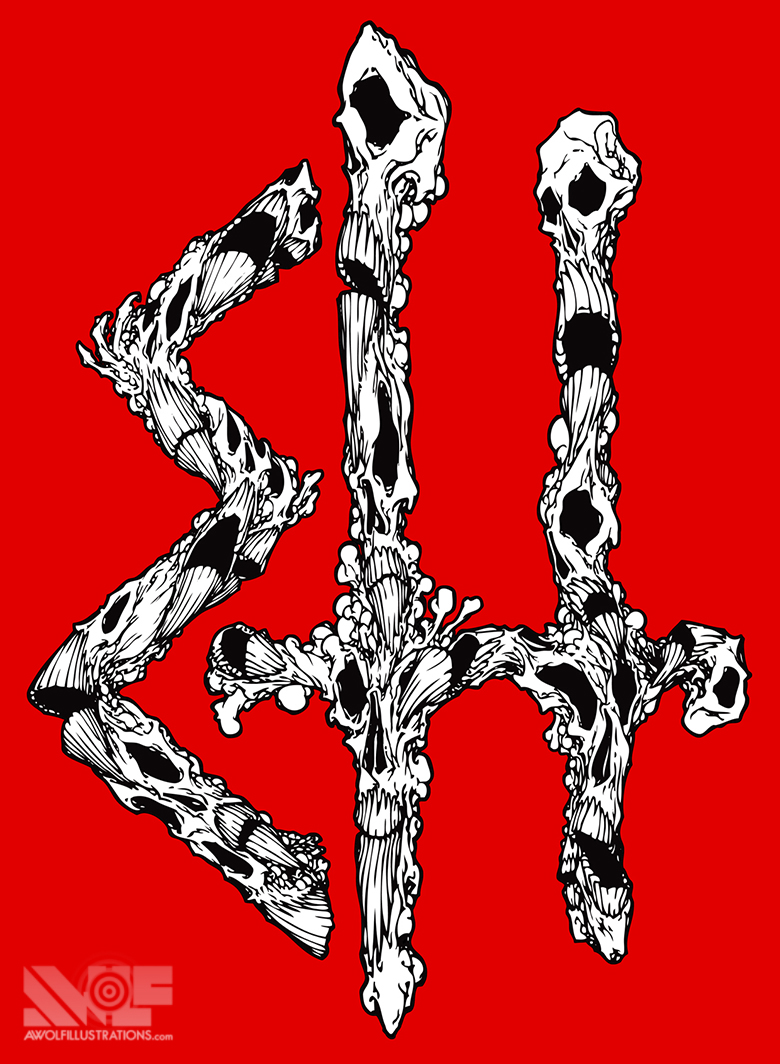 BEWARE NSFW.  Below is a very graphic and bloody gig poster I did for a Brauheist show that is a take on the often parodied Grant Wood painting American Gothic, which depicts a farmer with a pitchfork and what is though to be his sister.  In the Brauheist version the farmer has been replaced with Robert ‘Willy’ Pickton, the serial killer and a nude woman wrapped up in a pigs corpse.  Willy Pickton was from the same town as half the members of Brauheist and is known as Canada’s  because he confessed to murdering nearly 50 women from the downtown Eastside of Vancouver and feeding them to his pigs.  It is though that he could have killed even more, by the Canadian legal system stayed his trial after they had enough convictions to sentence him for life and also because his large property had been sold and developed. 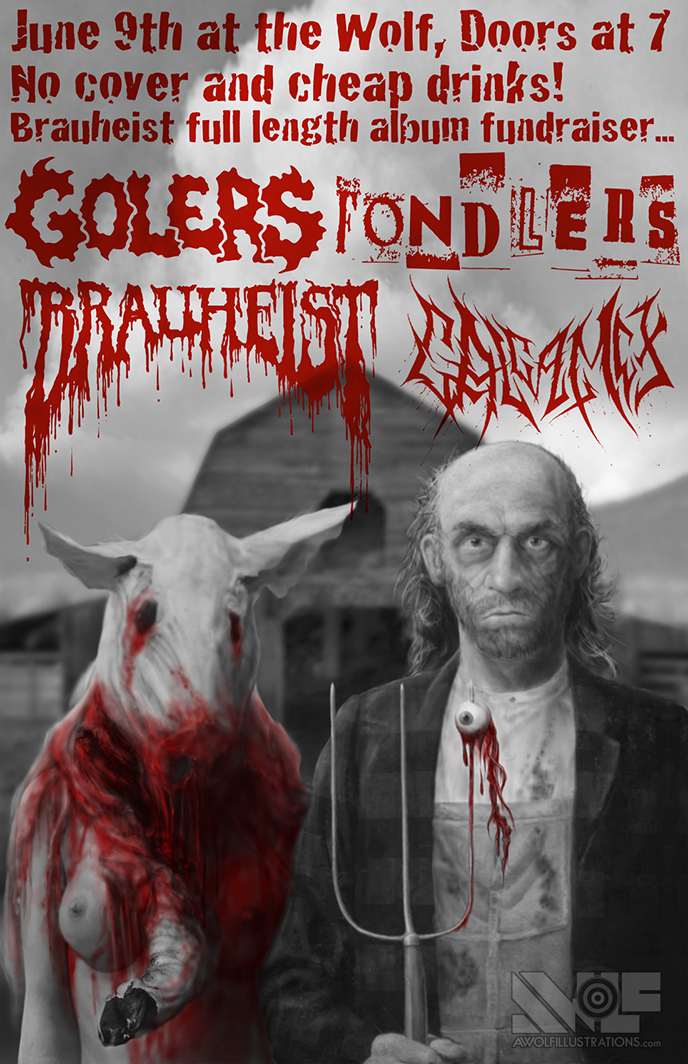 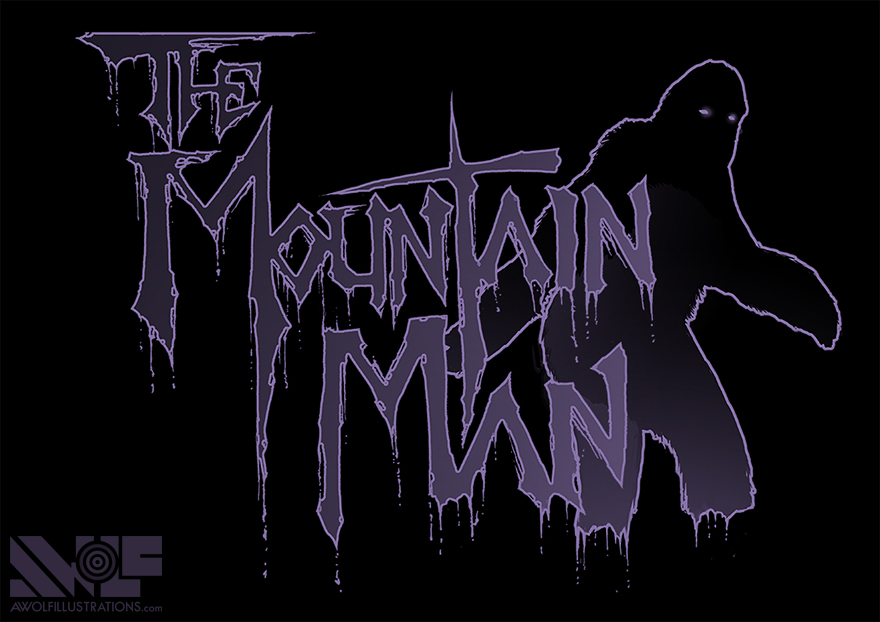 A Belgian band, My Name is God, contacted me about using a piece of artwork I had drawn previously drawn, that they found online, for their first album cover. 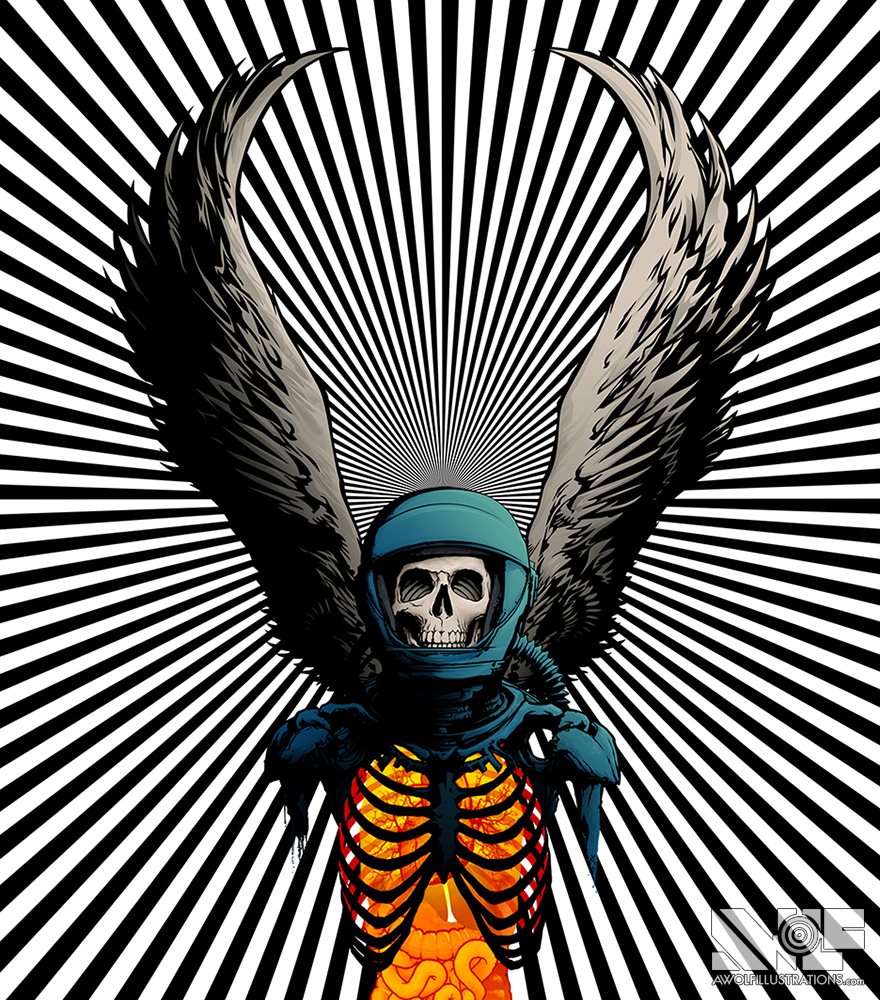 Lastly, is the first album artwork I had ever done, and a huge undertaking at the time, back in the day, when CDs were still kind of in fashion and a full booklet of artwork was needed. I remember spending so much time working with the band to create all the artwork. We constantly were going back and forth as I had just relocated to Berlin, the time change was a hurtle. So was the fact that I was just starting to wrap my head around Photoshop and had to learn all kinds of new techniques to complete the various different pieces and the multitudes of different styles of drawings and artwork required. 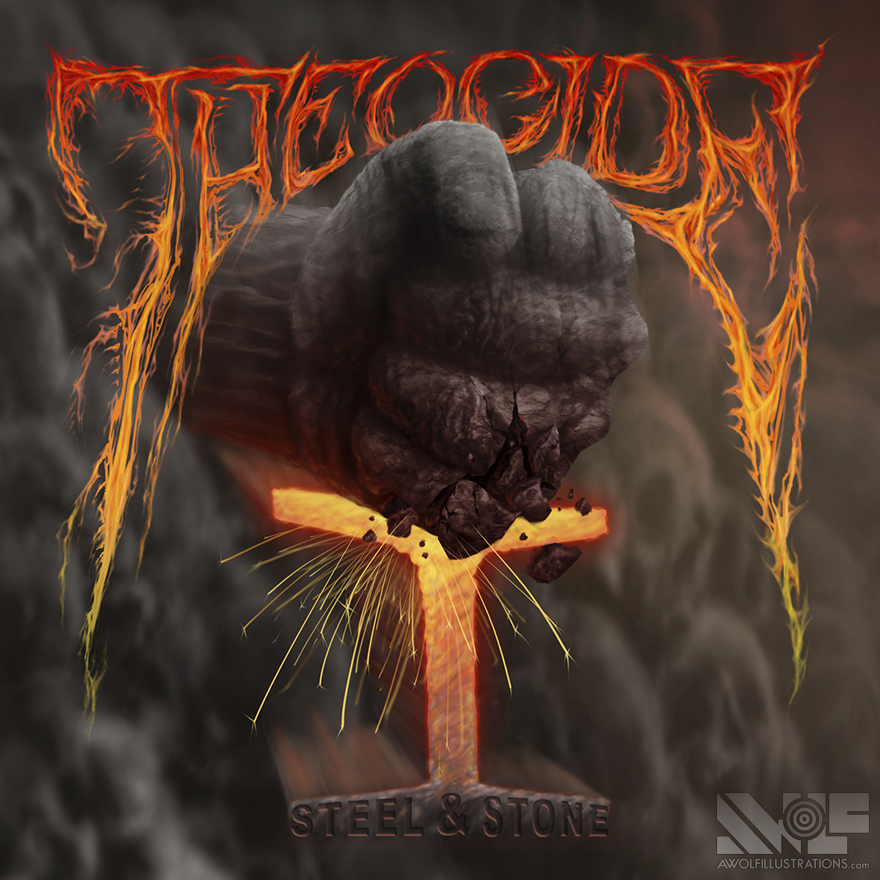 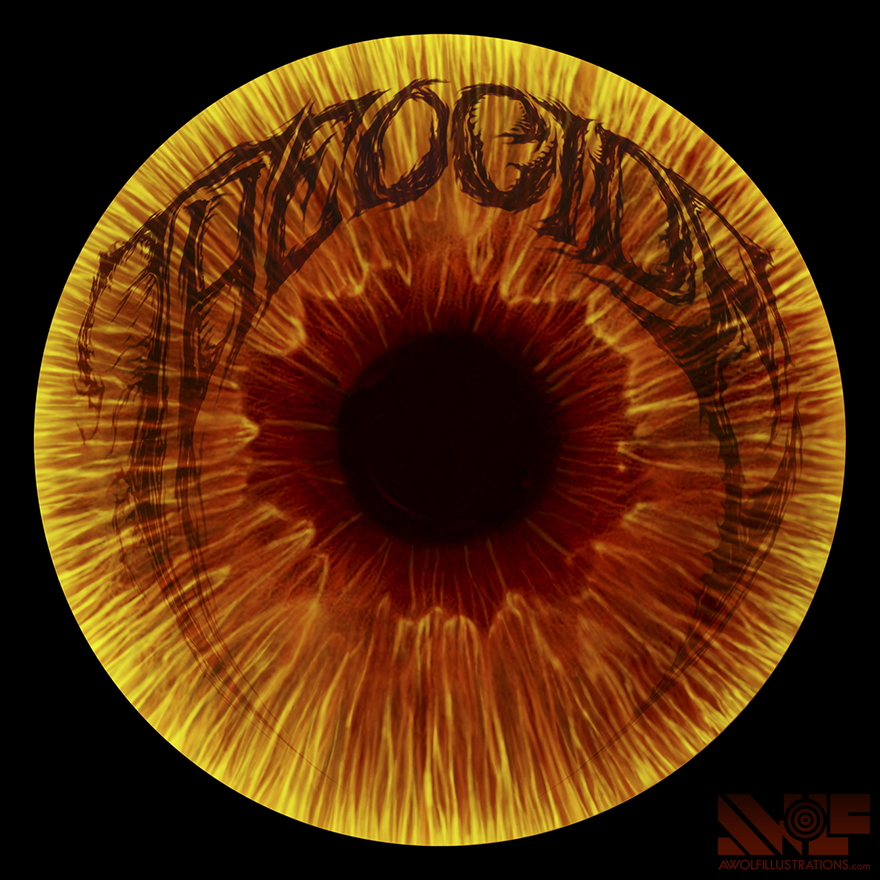 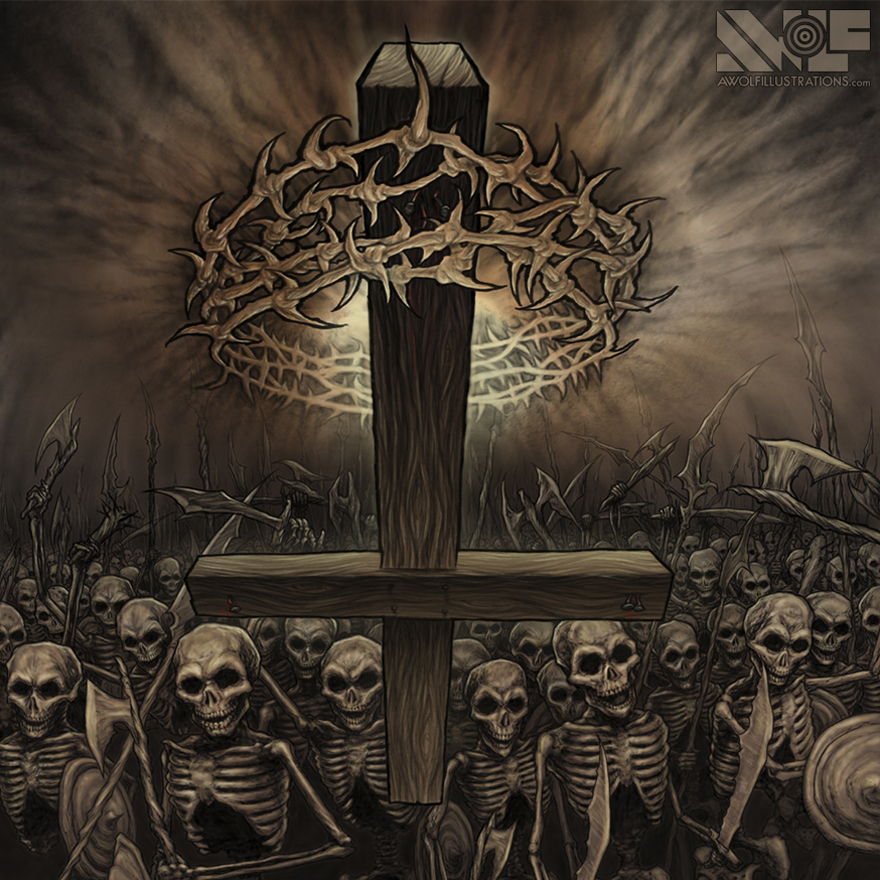 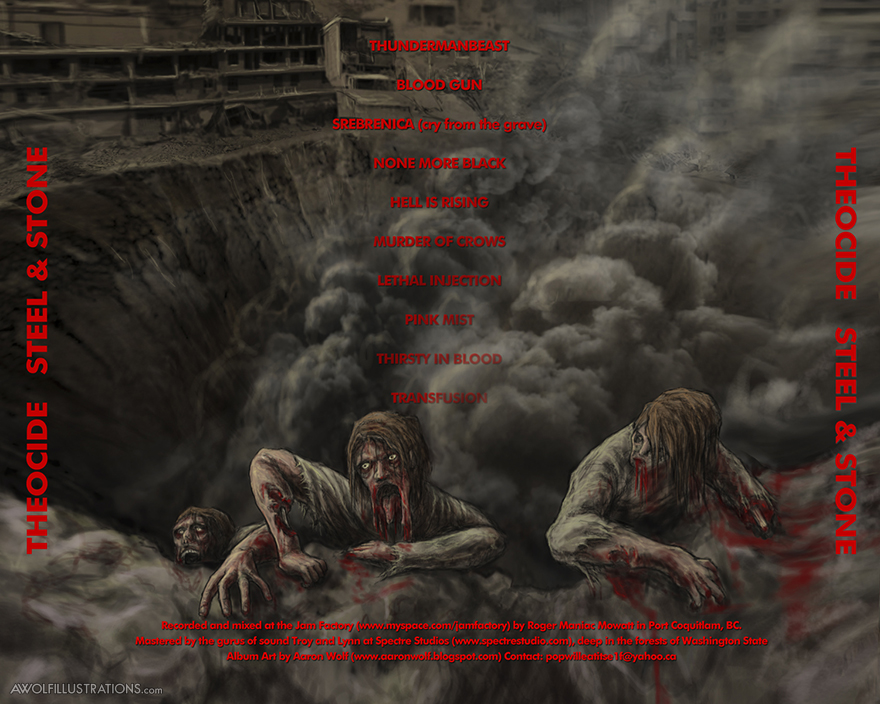 This is an unused poster I did for Theocide using an older piece of artwork I had done using Photoshop, digitally painting over photographs.  this could have been the first time I tried working this way. 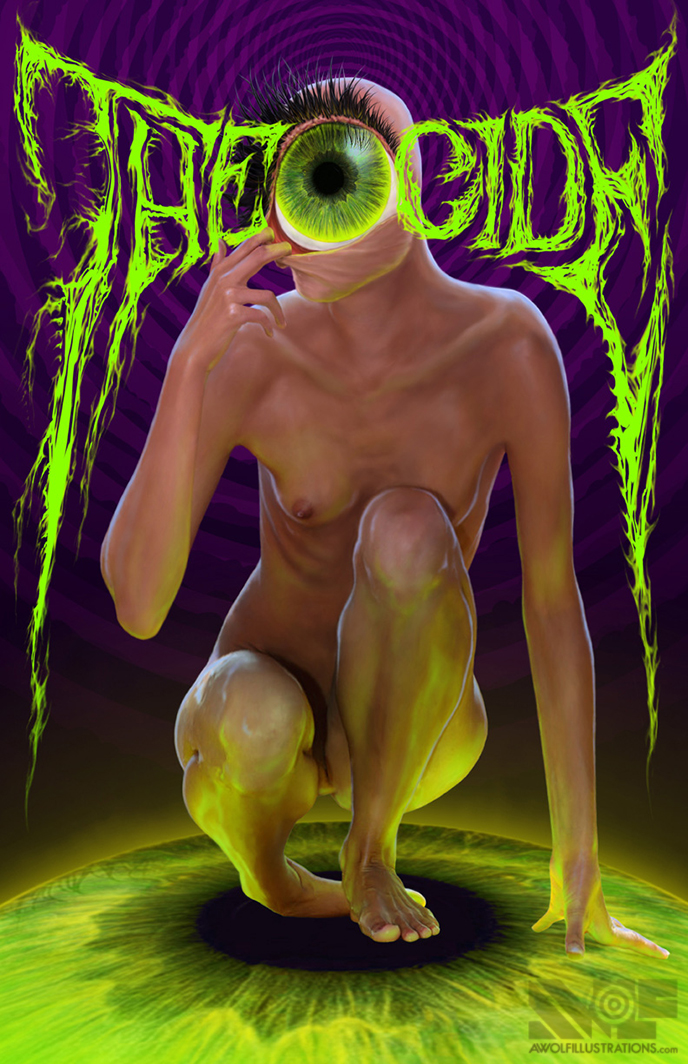 That’s it, That’s all! I would like to thank all the bands I have worked with over the years as all of these projects were a positive collaboration between myself and the members of all these bands. I can say I haven’t had a bad experience and the collaboration has forced me to learn many things that I would not have pushed myself to do.